Q So, my husband (42-year-old straight male) and I (38-year-old bi female) have had a closed relationship so far, but we have an active fantasy life. We’ve been together for about four years, and we both had our fair share of partners (casual and serious) before that. We like to talk about fantasies involving other people during sex, be they actual (past partners) or imagined (my beautiful surfing instructor on a trip). Once while he ate my pussy, I asked him about all the pussies he’s enjoyed in the past and he brought up one of his exes—a relationship that ended 10 years before we met—and he said he sometimes thought about her when he went down on and/or fucked subsequent partners, including me. This turned me on. A lot.

Then one day, in an unrelated conversation, it came out that he’d been engaged to her, that the reason they broke up was because they couldn’t make a long-distance relationship work after he moved to the country where we live, and that it took him years to get over her. This killed it for me. Not only that, but I also now feel weird about all of the times we fantasized about her in the past. It’s not like he did anything wrong—I never specifically asked how serious the relationship was or why it ended—but I can’t shake the irrational feeling there was an omission.

I don’t see her as a threat—they’re not in touch and she lives in another hemisphere—and I believe him when he says he has no significant baggage about any of his exes, including her. But knowing she was one of the most significant relationships in his life makes fantasizing about her—out loud, with me—feel “off.” I don’t just have this feeling just about her now, but about his past overall. How do I shake this? Thoughts?
—Turned On Turns Into Turn Off

Let’s give it a whirl…

So, your husband was engaged to this woman and presumably lived with her for a time, but your husband’s relationship with this woman nevertheless meets just one of your three somewhat arbitrary criteria for “pussy it’s not okay to think about during sex with a current partner.” Yes, it was a serious relationship, but they never married or had kids. And if they had wanted to be together, they would’ve found a way to make it work despite the distance. If she had wanted to be with your husband more than she wanted to remain where she was living when they broke it off, she could’ve married him and emigrated.

Likewise, if your husband had wanted to be with this woman more than he wanted to remain where he was living when they broke it off, he could’ve married her and emigrated. Neither made that choice, TOTITO, and I’m guessing neither made that choice because the serious wasn’t as serious as the “engaged” thing makes it sound. Yeah, yeah: someone proposed (most likely your husband), someone said yes (most likely his ex). But words are cheap and “engaged” is a just a word. It’s a promise and a serious one, TOTITO, but in the end it’s just air.

You say been with your 42-year-old husband for four years. His relationship with his former fiance ended 10 years before you two met. So, that means your husband was at most 28 years old when he broke off his engagement with his ex, and assuming they’d been dating for a few years, he was what? In his mid-twenties when they met? That means his prefrontal cortex, the part of the brain involved in executive functions like decision making, long-term planning and higher reasoning, wasn’t even fully formed when he proposed to this woman.

So, you have a choice. You can attach a lot of significance to the fact that they were engaged or you can look at the other facts in evidence—that they both chose the place where they lived over the relationship, how old they were at the time they got engaged—and see the relationship as far less significant than the “engaged” label makes it sound.

All that said, if hearing about the pussies in your husband’s past isn’t doing anything for your pussy right now, tell your husband you don’t want to hear about them for the moment. If you miss dirty talk during sex, instead of talking about hot sex you’ve both had in the past, TOTITO, try talking about all the hot sex you’re going to have in the future. 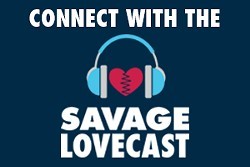 This week on the Lovecast, a literal ghosting.

For the past few months, I’ve been hooking up a lot with my coworker (I’m a bi woman, he’s a straight man). Things are going well, we really like each other (we’ve even said “I love you” to each other), but there are a couple of problems. First, I’m 23 and he’s 40. The age difference doesn’t really bother me if I don’t think about it too much, but it matters to a lot of my loved ones. Second, I’m not looking for a serious relationship, as I haven’t been single in a while and am kind of going through my “ho phase,” but it seems like he wants to be exclusive. I’ve tried to break things off or slow things down, but he’s going through horrible shit right now and needs me.

I have improved his life, and he has improved my mental state, but he’s also kind of a bad influence and has gotten me back into bad habits. To make matters worse, the new guy at our work seems to be into me and he’s cute and way closer to my age, and we get along really well, so I might want to give that a shot. I don’t know whether to end things, or even how to end it if I wanted to. Any advice on how to get out of this gracefully?
—Pretty Horrible At Something Easy

A When you say you want to get out of this “gracefully,” what you mean is you want the impossible from me. You want me to tell you how to end this relationship so subtly that the guy you dumped doesn’t even notice or get upset. Sorry, PHASE, but there’s no way to end things with the coworker you’re currently fucking so you can start fucking the coworker you’d rather be fucking without the coworker you’re currently fucking finding out you dumped him so you could start fucking a different coworker.

Read More:When a turn-on turns into a turn-off