An online forum for women created to tackle misogyny and offer dating advice has come under fire for echoing incel culture by scrutinising and ridiculing men.

Founded in 2019 by a ‘collective’ of anonymous women ‘from all walks of life’ the blog Female Dating Strategy is an online community claiming to help women enter ‘relationships that truly benefit them’.

It was created in reaction to the Red Pill or Incel communities – a collection of websites, blogs, and online forums which oppose feminism and promote masculinity and misogyny.

Core beliefs include that ‘most men are not of value’ to women, that a man’s ‘role is to be the pursuer’, men must ‘invest’ in you before you allow them to have sex with you, and that it’s not acceptable to date a ‘financially-challenged man’.

FDS labels unsuitable men ‘scrotes’, claims males with personality disorders or small penises should be avoided, while women should never move in with a man before marriage or have sex on the first date.

In recent years the website has expanded considerably, branching out into a host of Reddit threads which includes the ‘FDS handbook’ – a collection of over 100 lengthy posts laying out their ideology, while the group’s main thread has 206,000 members.

While the female-only forum is framed as pro-women, it asks female users to tailor their personalities in a bid to attract the ‘right sort’ of man – divvying men up into categories of ‘high and low’ worth. 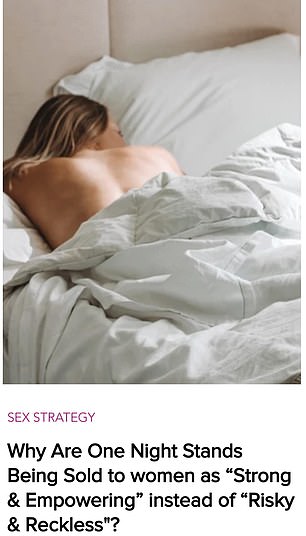 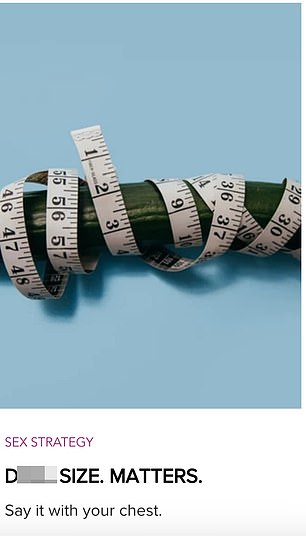 Founded in 2019 in reaction to Red Pill Rights, Female Dating Strategy is an online community claiming to help women enter ‘relationships that truly benefit them’. Among their core beliefs influde that women should not have one night stands and the size of a man’s penis matters

Emma Sayle, the CEO of sex-positive social network Killing Kittens, says that ‘any site that rates humans as lesser to each other by using derogatory terms is never going to end well’.

She believes that by ridiculing men on the website, users could actually be worsening misogyny by tapping into male insecurities.

‘Belittling an individual makes them feel inferior and feeds insecurities, playing into misogyny, and keeping the cycle of misogynistic dating alive’, said Emma.

‘No one is ‘too good’ for anyone else. There’s no ‘out of your league’ or ‘cr*p in bed’. Different people have different chemistry, and there’s someone for everyone at the end of the day. Who is anyone to judge what determines a high-value or low-value man?’ 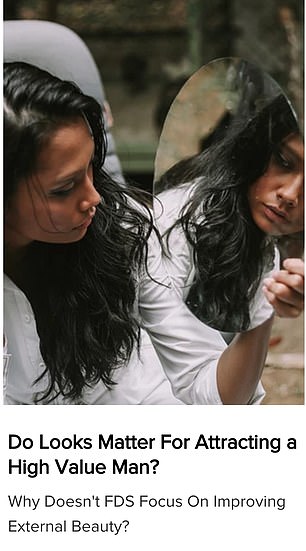 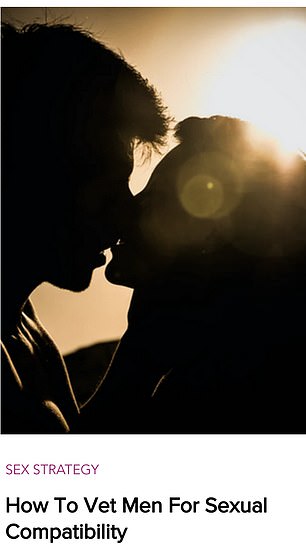 The group divides men into categories of ‘high and low value’ and tells users that a man needs to ‘invest’ in them before they have sex, claiming that ‘P**y has value, and d*ck doesn’t’

The website that sparked Female Dating Strategy: What is Red Pill Rights?

Red Pill Rights is part of the ‘manosphere’ –  a collection of websites, blogs, and online forums which oppose feminism and promote masculinity and misogyny.

The Reddit forum and subsequent blog calls itself a ‘discussion of sexual strategy in a culture increasingly lacking a positive identity for men.’

Users who ‘swallow the red pill’ have seen the world as incels believe it is, stacked up against men with feminism a damaging and dangerous ideology.

Incel groups are part of the so-called manosphere, and believe that society is inherently anti-male, with women controlling the world by choosing who or who not to have sex with.

‘Incel’ stands for ‘involuntary celibate’ and is a term used by a certain group of men who blame their inability to form relationships and have sex on women.

Incels consider their looks to be the root of their problems.

Taking a ‘black pill’ is to adopt a fatalistic and misogynistic world view and a position that is impossible to change.

Rodger, who came from a privileged and affluent background, killed two women and four men in a gun and knife attack in 2014.

He targeted his college’s Alpha Phi sorority house, whose members included ‘the kind of girls I’ve always desired but was never able to have’.

In a ‘manifesto’ he wrote before committing the atrocity, Rodger claimed: ‘I am the true victim in all of this. I am the good guy.’

The murderer has since been venerated by incel followers, including Christopher Sean Harper-Mercer, who shot nine people dead in Oregon, US, in 2015, and Alek Minassian, who killed ten in a vehicle-ramming attack in Toronto, Canada, in 2018.

Incel groups have been accused of inciting violence and misogyny online and numerous communities and subreddits have been banned over their content.

While there are several posts addressing widespread issues such as drink spiking and sexual assault – many others rant about finding avoiding ‘worthless’ men and abstaining from sex ‘without investment’.

Posts are usually shared using tags such as ‘Male depravity’, ‘Pick me culture’ – referencing  women who are desperately seeking approval from men – or ‘Level up’ – meaning a post helping to establish yourself as a ‘high value woman’.

Users often call out members of the Red Pill subreddit for their attitudes towards women – however share posts with similar rhetoric towards men.

For example, one post titled ‘Men don’t have sexual needs’ claims that males only wish to have sex in order to ‘degrade, dominate, humiliate, feel powerful and get other men’s approval’.

Another recent post links to the Female Dating Strategy podcast of which the latest subject is ‘body-shaming men for their own good’.

The Female Dating Strategy offers a ‘handbook’ to first time users of recommended reading, including a guide on how to become a ‘high value woman’ and how to spot a ‘low value man’.

The first step of the ideal ‘dreamgirl’ is becoming an ‘immovable mover’ – someone who makes men ‘feel safe’, is ‘trustworthy and reliable, because you know she is how she is’.

A ‘high quality woman’ takes care of her health and hygiene but ‘isn’t crazy’ and if she suffers from mental health issues must manage them through therapy or medication.

The site also categorises females into those who are looking to appease men, ‘Pickmeshas’, and even uses terms common on the manosphere like ‘Becky’ to describe a woman who falls for a ‘low value man’.

As for low value men, an entire page is dedicated to helping users spot personality disorders in potential dates while the official Female Dating Strategy website states that penis size very much matters for enjoyable sex.

Women are told that ‘having children with LVM will quite literally ruin your life.’

‘A LVM will destroy your life if you let him. Wear condoms like your life depends on it. In fact, I advocate for no sex for at least 3 months and also STI checks if possible. Males can infect you with deadly diseases that could bar you from having children later on’, reads one post.

Men are generalised into eight categories of the ‘LVM’ to be avoided; The clinger; The parental seeker; The unavailable man; The man with the hidden life; The mentally ill man; The violent man and The predator.

Alternatively, a ‘HVM’ is a male who will financially and emotionally invest in a woman, continually – he must be attractive to the female, good with money and constantly volunteer his time to help out his partner.

Core beliefs include that ‘most men are not of value’ to women, that a man’s ‘role is to be the pursuer’, men must ‘invest’ in you before you allow them to have sex with you and you must never date a ‘financially challenged man’. Pictured, examples of post titles on the FDS subreddit

One post in the handbook reads: ‘Unless he’s consistently investing his resources in you, he has no place in your life’.

When it comes to housework, a HVM will recognise that it’s almost impossible to split house work evenly – those who do are ‘unicorns’ – and will offer money to pay for a housekeeper to help you out.

In order to bag a HVM rather than a LVM, women must follow a strict set of rules – including never sleeping with men on the first date or moving in with a man before marriage.